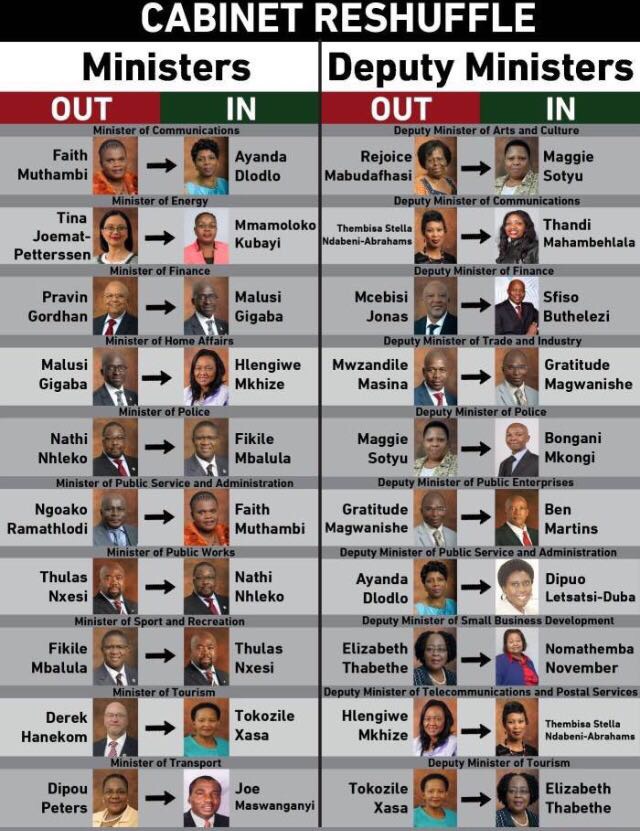 In the late hours of the evening of 30 March 2017, the Presidency of the Republic of South Africa issued an alert that it would make an announcement related to changes to the National Executive.

In an unprecedented move, President Jacob Zuma effected 20 sweeping changes to his Cabinet citing the need to “improve efficiency and effectiveness” and “bring some younger MPs and women into the National Executive in order to benefit from their energy, experience and expertise” as his reasons.

In total 5 former Cabinet Ministers and 2 former Deputy Ministers were axed from the National Executive.

The new Ministers and Deputy Ministers appointed by President Zuma have been issued a clear directive by the President to work tirelessly with other Cabinet members to bring about “radical socio-economic transformation” and delivery of the party’s electoral mandate.

The changes to the Cabinet have been met with widespread public and political outcry and condemnation for the manner in which it was executed. This includes for reasons relating to the removal of well-performing cabinet ministers such as the Minister and Deputy Minister of Finance and the retaining of under-performing and controversial Ministers.

Opposition political parties have resorted to the Courts in search of a remedy and called for Parliament to vote on a Motion of No Confidence in the President.

Upon the news of the imminent Cabinet reshuffle and the potential the South Africa Rand had already weakened around 4% to the US Dollar. By the end of the week, the Rand was calculated to have weakened 8% against the US Dollar – the biggest weekly drop since 2015 when the then Minister of Finance, Mr. Nhlanhla Nene was summarily removed from his position by President Jacob Zuma.

The ETHICORE Political Lobbying team is pleased our first glimpse to the Cabinet changes and its implications.