South Africa was the first African country to undertake an Integrated Nuclear Infrastructure Revie (INIR) and the first country with existing nuclear capacity to do so. This is according to the International Atomic Energy Agency’s (IAEA’s) director-general Yukiya Amano, who is in South Africa as part of the agency’s infrastructure assessment mission. This, he argued, demonstrated South Africa’s commitment to pursuing a responsible programme in a transparent manner.

Amano was in South Africa as part of an Integrated Nuclear Infrastructure Review (INIR) mission, through which IAEA experts had been requested to conduct an independent assessment of South Africa’s nuclear infrastructure and its readiness to pursue major new developments. The INIR had been identified by government as a critical milestone ahead of any investment decision and/or public consultation process. The IAEA mission followed on from a South African self-assessment report, which was completed in mid-2012 and which had been submitted to the IAEA team. The IAEA experts, who visited South Africa between January 30 and February 8, had already compiled a preliminary report, which was handed to government at 11:00 on Friday, February 8.

The review, which is not legally binding, assessed the country’s readiness to start purchasing, constructing and operating nuclear power plants and is based on an evidence-based questionnaire covering 19 key nuclear issues, from funding and financing through to security and waste management.

Details of possible policy, technical, regulatory, safety, security and skills gaps were not immediately divulged, but Magubane said that government was committed to making the results public once the final IAEA report became available. Amano praised government openness, saying that it was important for the credibility of the nuclear industry for both the good and the bad news to be shared. 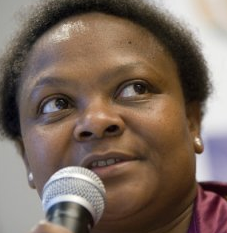 Meanwhile, Department of Energy (DoE) director-general Nelisiwe Magubane revealed on Friday that South Africa is likely to reach a “point of no return” with regard to a proposed new nuclear energy build programme by June this year. She was speaking at the South African Nuclear Energy Corporation’s (Necsa’s) Pelindaba site, west of Pretoria, following a meeting with Amano.

Magubane said the country was progressing through the various milestones endorsed by Cabinet ahead of any nuclear decision and indicated that that government still considered the solution as central to meeting the policy objectives of supply security and reducing the country’s carbon footprint.

South Africa’s current Integrated Resource Plan (IRP) for the period 2010 to 2030 envisaged the deployment of 9 600 MW of new nuclear capacity between 2023 and 2030. However, delays to the process meant that the first new nuclear capacity was unlikely to enter the system by 2023 as initially envisaged.

In addition, the IRP was due for review, with most energy-sector observers having noted that it is no longer aligned with changes in the global electricity sector, notably in the low proportion of generation capacity allocated to natural gas. In addition, the demand-growth assumptions were unlikely to be met, owing to far slower economic growth and rising power prices.

Nevertheless, Magubane indicated that a nuclear determination was likely to be published by Minister Dipuo Peters in March, which would be followed by a decision on a build programme by June. This decision would be overseen by National Nuclear Energy Executive Coordination Committee (NNEECC), which is chaired by Deputy President Kgalema Motlanthe.

The DoE has commissioned consultants to interrogate the cost and financing options associated with the development, which some have estimated could involve and investment of up to R1-trillion. Those cost projections together with the possible financing frameworks would be delivered to the NNEECC by June and would be used to inform any procurement process that could arise.