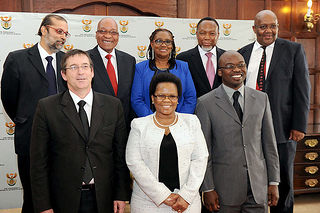 On Tuesday 9 July 2013, President Jacob Zuma announced wide ranging changes to the National Executive (i.e. Cabinet) and the fourth in as many years during the term of the current administration since coming into in 2009 and with general elections on the horizon in 2014.

Three altogether new appointments were announced, all of whom were generally highly regarded Members of Parliament recently within the ANC Parliamentary Caucus and with high levels of responsibilities of various parliamentary committees and in the caucus. They are:

Two ministers are shifted within the Cabinet, namely:

Two Ministers are removed from the Cabinet altogether, namely: